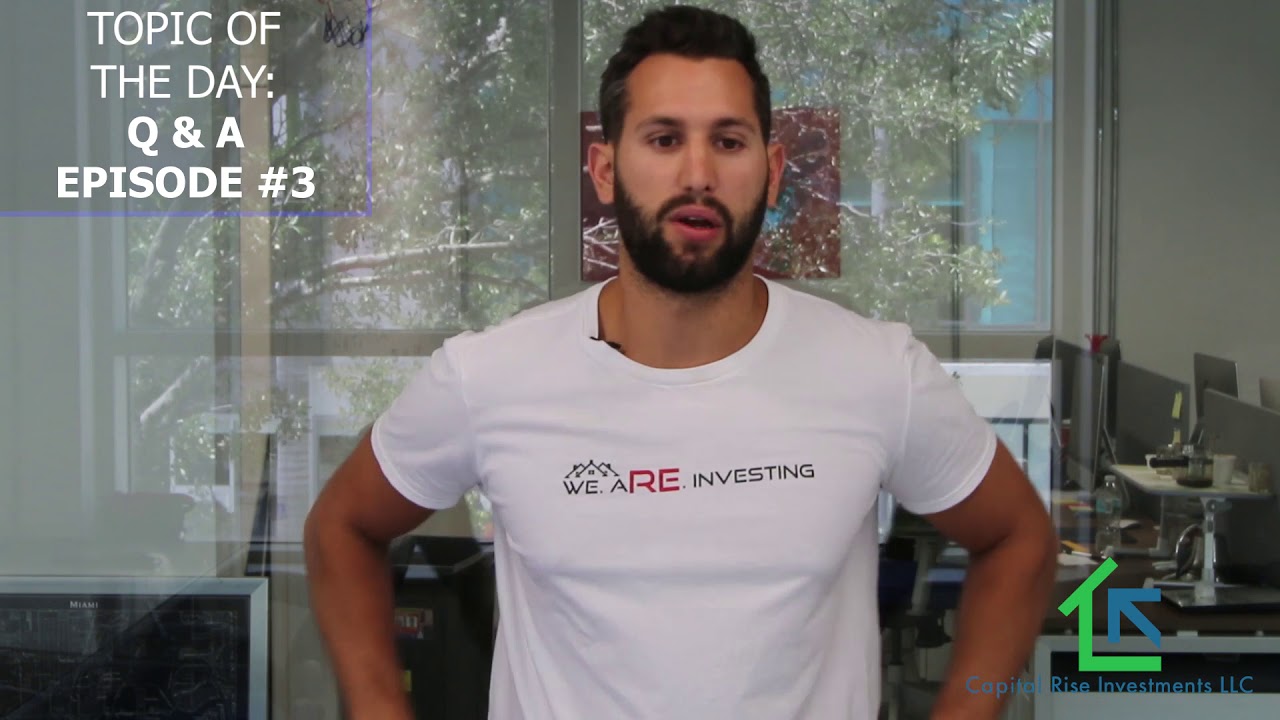 Raul: Hey, guys. Raul here from Capital Rise Investments, your weatherman for real estate wholesale investing. That was an interesting intro. Anyway, so today is Q&A episode number three. I don’t know why I’m going down every time. So number three. I saw that a bunch of people saw these videos about the Q&As, and I guess you guys like me answering questions, or I don’t know. I’m gonna answer a bunch of questions that Amelia’s going to ask about how to scale a real estate business. I think it’s pretty cool. It’s something I’m really passionate about.

Amelia: First question: What is your secret sauce in scaling?

Raul: How to scale a real estate business. The number one secret sauce is consistency. That’s the number one secret sauce. There’s going to be so much shit getting in your way. There’s going to be so many challenges. There’s going to be everything possible going wrong at once. This is going to happen multiple times and you just have to be okay with that and accept that that’s just going to happen. If I had to say I had a secret sauce, it was that. It was just consistency, staying alive, staying in there, staying in the batter’s box, stay, keep swinging or whatever you want to call it. Keep shooting a hockey puck. I don’t know what sport you guys relate to. I don’t know. In Miami, I don’t think people ever play hockey, but maybe keep shooting the hoop. Anyways, I get overboard. I would say that’s the secret sauce in scale the real estate business. Stay consistent.

Amelia: Next question. How do you find such awesome talent?

Raul: Oh, thank you. Anyways, there’s no easy answer for this. Some of it’s intuition and some of it is a legit process for hiring and firing people. Some simple methods are put a bunch of ads up on … indeed.com is really good, Craigslist, Glassdoor I used, ZipRecruiter. I don’t think I’ve ever used ZipRecruiter or Glassdoor. I think Glassdoor, I’ve used once. ZipRecruiter, I’ve never used. Indeed and Craigslist, I use them. You just have to think of it as deals coming your way or think of it as another business process. Go through every application. Sort out the pros and cons. Do a lot of interviews. Do a ton of interviews so that you can get familiar with what people have to offer, what’s coming your way. Be very clear on the job rules and responsibilities upfront and that, people will know what they’re getting into.

The intuition part is kind of just when you talk to so many people and you interview so many people, you’re already going to start getting these little triggers of, “This person’s good,” or “This person is just bullshitting me,” or “This person just wants a job quickly” or whatever. That’s the intuition side. I’ve had a bunch of people that I passed on hiring, a bunch of awesome people, but I know I had that weird feeling that they were just using me and this company as a stepping stone for them to get to another job somewhere else. You got to have that balance of kind of knowing and setting up a process and clear roles, responsibilities in place. Just interview a shitload of people. Next. Hit me.

Amelia: Next question. What tips do you have on scaling a fix and flip business?

Raul: Fix and flip businesses are pretty tough. I’m not going to lie. You can make a lot of money doing it and I would say the biggest … I’ve talked to some pretty big-time investors. I have a guy in Tampa that he fix and flips, I think, over 250 houses a year. I visited his office and saw his systems and his process and stuff. The biggest thing is you got to have very clear systems [inaudible 00:04:21]

I don’t know. Whatever. You got to have a lot of managers in place, so property managers, project managers. A little really detailed trick is every week, pay your contractors or your handymen, every single week. Don’t do it, “Hey. Here’s half and half.” Over time, that doesn’t work. Trust me, believe me, ask the big guys, ask me. It just doesn’t work. If I have any tips of scale, one is good underwriting, meaning find good deals either from other wholesalers or yourself. Have somebody doing that besides you. I mean, you can do it if you’re a one-man show for now, but second, train somebody to underwrite the deals. Train somebody to look at the properties and give you an estimate fairly quickly so you can buy the good deal. Remember, the good deals go fast. Then three, have a lot of clear and concise management week after week after week after week.

Try your best to get good contractors or good handymen. I know it can be a challenge because it’s tough. They have a ton of jobs going on and a lot of them don’t really relate to business people and stuff. Nothing bad if you’re a handyman or contractor. There’s a lot of good ones out there. I’m just saying spend your time finding those good ones. It’s really, really important. Good people, good system, almost like any business, and just a lot of management, good underwriting. Hit me with the next one.

Amelia: Last one. How do you find all this money?

Raul: All this money? I wish I had [inaudible 00:05:55] How do you find the money? There’s a ton of private lenders out there. That’s my first answer. When I started, that’s what I … I kind of just saved enough money, I think about 20 or 30 grand through working or whatever, and then I just used lenders. I made one deal, got the profits, put it in another one, got the profit for another one. Blah blah blah blah blah. But my first answer’s private lenders. My second answer, I would go private, prove your model, prove that you can make money, then go to friends and family. Friends and family’s great. I’m not saying “no.” I’m just saying do it yourself first. Risk a private lender’s money first, then your great-aunt Martha. Martha doesn’t want to lend you money and lose it. That’s her 401K. I’d rather you lose someone else’s money and put your name on the line for that.

I would say private lenders, then friends and family. Then you just start building a buyers list, so you just start networking. Go to all these events, go to these REA meetings, meet people online, look up on Facebook, on LinkedIn, visit people’s offices. There’s no shortcut. There’s no shortcut to finding money. There’s just a ton of effort. The only shortcut I can say is private lenders and you’re going to have to pay for that shit. That shit’s expensive, but if you really believe in yourself and you do the numbers right and if you have that education down, you should be able to make money on these deals. If you don’t, ask me. I’ll guide you through that first process. I don’t have all the time in the world, but I can guide you the best as possible. I also have this spreadsheet that you can put lenders’ criteria and see if you still make money.

Underwrite your deal well, use lenders, prove the model, go to friends and family, raise more money that way. After that, build a little bit of a buyers list. Build a bunch of lenders and then just start making money that way. Find the deals. Get good at finding the deals. You to us, to other wholesalers, on your own. Get good at that and the money will follow.

And that’s a wrap, guys. If you guys like this stuff, subscribe. I’ll keep making videos for y’all. If you’re interested in any deals down here or something, hit me up. Peace out!