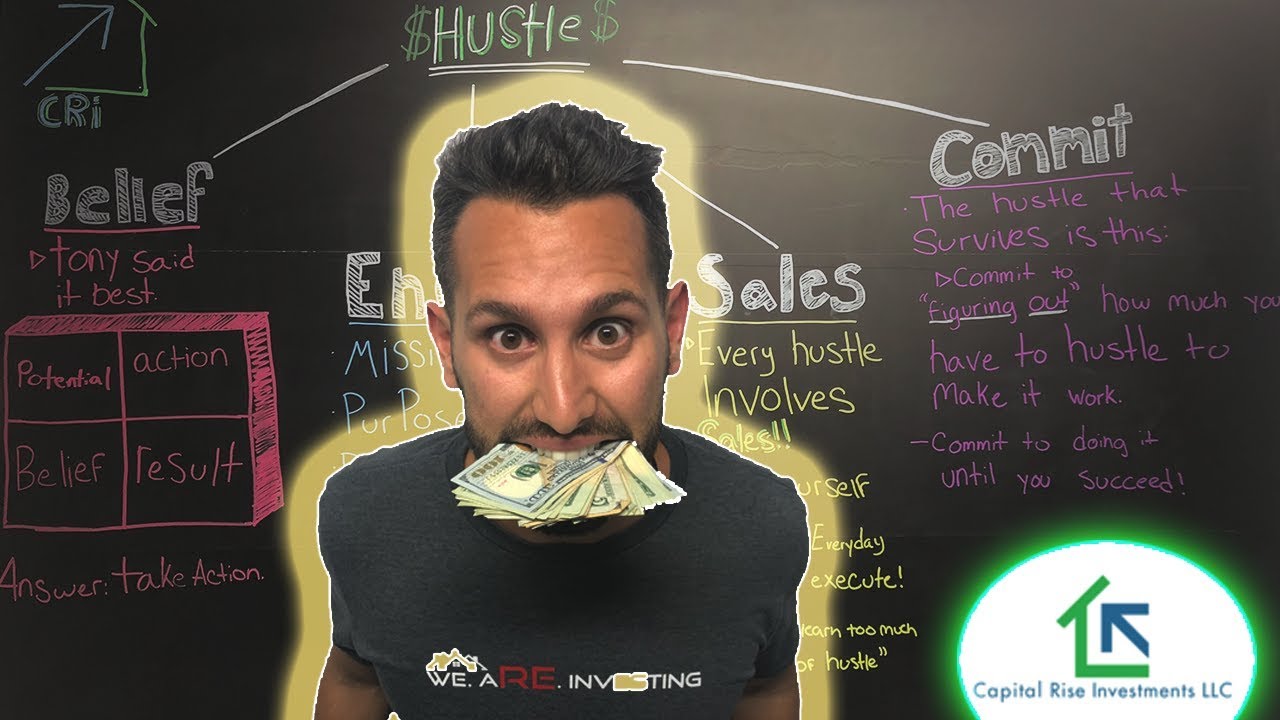 Speaker 1: Oh, you started it?

Guys, listen up, okay? This is one of the most important topics we can ever discuss when it comes to business, finance, et cetera, it’s hustle. Hustle. What the hell does hustle mean? Okay.

So, I have … Let me get this. I looked this up, right? I looked up, “What does hustle mean?” in the dictionary. I was just curious, and hustle, what it means is, “To obtain by an energetic activity.” Okay? So, that’s what hustle means. Using energy. To obtain something using an energy and activity, right?

You believe you have potential, right? You start and a new venture. You ask for the raise, you open up a business, you start to sell something online. You start an eCommerce store, because you believe you have potential to do it. Does that make sense? A student has to believe, even a young kid in Kindergarten, right? They have to believe they’re going to pass their little test. Little test, because they’re little kindergarten, but there has to be a potential, a potential factor there. There has to be potential that you believe that you can do it. So, anyways. Sorry to get off on a tangent, but … See, I believe there’s a potential.

Then when there’s action, you get a result. Oh, cool, I got that house under contract. Or I didn’t, I was really close. Or I didn’t sell that house. Or I did. There’s a result. Then after that result, comes more belief. And it just goes full circle. Or full square, as you can see.

And then I knew that I had the potential. And what really successful people do is that they picture this before it even happens, right? So in your mind, you can see the potential in yourself. Okay, man, I’m a beast. Man, I had a good upbringing, or man, I’ve been through so much that I know I have the potential to overcome this and get through, and fight and sell, make money, make more, increase the wealth of myself and for my family. Potential.

Then they see themselves taking action. Cool. Alright, I know I have the potential so what do I have to do. Okay, man, I picture myself going out there and knocking on doors and working till night time until I get my first deal, make my $20,000. Result.

What does energy mean and how do you get energy? Energy is something, you gotta picture it, that energy is not something that’s just given to you, energy is something you create. Think of an energy plant, an energy factory or whatever, and it’s something that’s created through motion. In our body, energy is created through physical motion first, right? Tony Robbins talks about this as well. You’ve gotta your state, you gotta move, move, move, and that’s how you get energy. I’m sure all of you guys, you start working out, and you’re done working out and you have like this weird energy, right? Even if you’re tired, you have energy, because you have to create that energy. Anyways, that’s for the physical body.

Now, what’s is energy really talking about? The idea I’m talking about is to hustle, right? We wanna understand what hustle is and how to do it. This energy… You need energy to go hustle, right? You need to wake up at seven a.m. and you gotta go knock on doors, you’ve gotta make a hundred calls a day, you gotta go out there and make offers, whatever you wanna do in your business and your life. And energy is fueled by mission, purpose, and big goals. If you don’t have these three things, you’re gonna have a really hard time getting energy.

These are really big subject that we can go on and on forever but however you wanna figure these things out, however you wanna research these, that’s fine. I think I actually have another video that’s a 16 minute video that I go in depth about it. I’ll put a link also there or at the end of the video you see a thing. It’s me talking in a coffee shop or something and I go over it. Anyways.

Mission, purpose, and driven by big goals. Grant Cardone talks about big goals. He’s probably the best in the world at explaining why big goals work. 10x, all that shit. All that shit’s real. Whether you believe it or not, it’s real. If in your mind, you’re thinking 10 steps ahead, if in your mind you’re thinking 10 times bigger, you’re going to have a bigger mission, a bigger purpose, you’re going to have energy to get up in the mornings to fulfill these things.

Now, you won’t… You can set a 10x goal right now. You could write it down on a piece of paper and you won’t go do it and achieve it. You know why? Because you don’t believe that shit. That’s why that’s step number one, you gotta believe that shit. And these will give you the energy to get up and go out there and crush it, and crush your goals, and do whatever it takes to get there. Get a mission, get a purpose. It could be anything.

When I first started, I didn’t really have one, okay? My mission, my purpose, was to just go out there, start a business of my own that’s pretty cool, and make $100,000 a year. My first year I made $166,000, and then that’s when I started getting more mission and purpose driven, because cool, I fulfilled my monetary goal, now what else? Oh cool, I wanna bring people on. I wanna have a team that inspires me. I want to able to make enough money so that I can have passive income so I don’t have to work as hard and maybe do bigger projects so I can help more people, get on camera, employ more people so they can feed their families, et cetera, et cetera.

And then step two is do step one every day, so there’s three steps. Step one, sell yourself. Step two, do step one every day. Step three is learning to execute. Now right here, do not learn too much. That might be contradictory, that might be a contradiction from what you’ve heard with other people. I don’t want you to learn so much, I want you to learn enough to sell one thing, one service, get one contract, sell one house, sell one pair of shoes. Enough to have that meeting with your boss. One. Don’t learn so much, just learn enough to do one. Once you do one, the rest is gravy, the rest will come.

Really important. Sell yourself. Do step one, which is sell yourself every day. That never stops. Every day you have to wake up. That’s why affirmations exist. You’re selling yourself on that vision. You’re selling yourself on the belief. You get it? Sales. Sales is not some sleazy thing. Get that out of your mind. That’s been proven wrong a hundred times. Read Grant’s book. Read Never Split the Difference. They talk about sales and how important it is. And really sales and entrepreneurs and marketers are the people that change the world. People who change the world. So you have to really good at something yourself and then get really good at learning what you’re going to sell, the product or service, and execute. Just learn to do one. Don’t study everything. Just go out there and learn to do it.

Now, these are my three things, how I break down hustle. I wanted to add this in here because I think it’s important. If you want to be a hustler and always be wealthy and always have a future, this is the key. Commit. And I know this all sounds like some hoorah shit and that’s the reason I’m trying to put it into context as far as offers, contracts, doing deals, selling shoes, whatever you do, selling cars. I want to put it into context because although it is this woowoo thing, if you don’t believe in it and you don’t find it important, you’re going to be left behind. By people like me, by people like Tony Robbins, by people like Grant Cardone, who do this shit, man, and who teach this stuff. So I suggest you give it a try. Even if you don’t believe in it, give it a try. What do you have to lose?

It’s so key when you commit to figuring it out all the time. And figuring it out is a term I love and I think every entrepreneur understands this, every entrepreneur that’s actually doing something, understands this “figure it out” thing. And I think it’s something that… It’s little by little getting lost because technology, it doesn’t allow us to think critically about things. That’s why I actually encourage students to take classes such as calculus and hard maths because you have to figuring things out. It’s not very straightforward.

Again, why is this important? Why is hustle that important? Why did you do this video? There’s just… I like to simplify things. I like to get complex things and simplify it. Although hustle is such a small word, couple letters, and a small definition, it has such a complexity out there in the world. There’s hustle in every book. There’s hustle in every video. People are arguing, well, should you hustle? Work smart verus work hard? Stop hustling, you should be doing this. And stop hustling, you should sitting on a computer. It’s all accurate. But what they don’t understand is that the successful people do hustle. Some hustle smarter, some hustle harder. Doesn’t matter. They all understand these principles. They all understand what this is. And they all do it.

So. Take a deep breath. Hustle, get your hustle on, man. Focus, guys. Believe. Energy. Sales. Commit. I love you guys. I will see you in another video soon. If you love this shit, if you don’t. I mean, if you don’t, you don’t have to subscribe, but subscribe if you wanna see more. I will be coming out with more content. If there’s anything you want me to talk about, I am really good at real estate wholesale. I’m good at figuring it out so anything you guys kinda throw my way, I will have a response, it might not be the best but I’ll have a response. So comment, I’m always looking at my comments. Subscribe, guys. Anything you wanna see, check us out. Reach out to us. You can schedule a call with me for 15 minutes just to talk some shit. Namaste, guys. Peace. Love you guys.