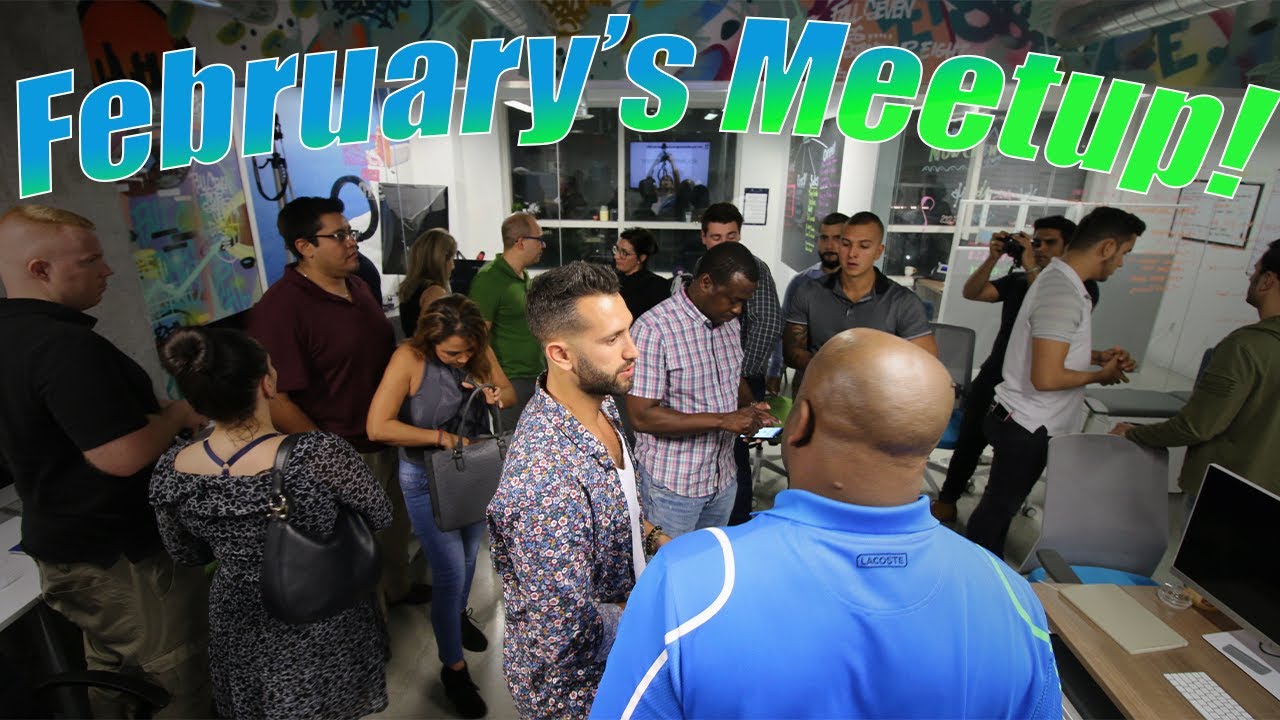 Raul Bolufe: … are pretty serious about learning or serious about just growing as an individual or learning about this et cetera. So, we’ve actually got a ton of cool [inaudible 00:00:09] that are working with us in the meetup. Ended up doing deals with, online ads, photography et cetera. So, it’s pretty dope.

So we’ll kinda jump into it. This is me. This is how you can kinda connect with me and our company. Our Facebook, our Instagram, and our YouTube. The YouTube channel is kinda like the newest thing that … my newest little venture … As you can see my PowerPoint skills are very good, but done is the new perfect so anyways.

This is me. 21 when I started, I’m 26 now. Kinda just figuring the whole thing out. I’ll go into a little bit how exactly what I did, step by step, but I just wanted to show you some visuals of what it actually looked like.

… we’ll send you a piece of mail. What piece of mail do I send? Send this one. If you don’t know, send this one. You can send whatever piece you want, but this one’s been pretty tested and it’s cheap. It’ll cost you probably like 40 something cents a piece on the high-end. On the low-end probably high 30s. And can send a bunch mail this way. You can send letters, yellow letters, you can do research on this, and you’ll find some stuff. What, did you have a question? Cool.

So most story is, you [inaudible 00:02:19] buy a list on this source dot com, [inaudible 00:02:21], REI Automator et cetera, and you guys choose yours. You send that to a mail house, the mail house will send the mail for you, you answer the call, and you say, “Hey. This is awesome. When can I go see your house? I’m ready to make you an offer.” You go see their house and you make’em an offer. That’s obviously a very over-simplified version, but overall you get my job.

So, any questions on the direct mail part? There’s a lot in there, but-

Raul Bolufe: Yeah. Which is not a lot compared to some people, but it just depends on your budget and stuff. Hey, how much you [inaudible 00:03:02]?

Speaker 3: Well we did one and a half million postcards last year.

Raul Bolufe: You did one and a half million postcards last year. And how much revenue did that bring?

Speaker 3: Just 30 cents a piece is what I pay. But yeah we did a lot of PPC and other stuff as well.

Raul Bolufe: So yeah, most story it works. You just gotta do it consistent. And you also …you’ve been mailing for years, right?

Raul Bolufe: So, yeah. So that’s how many pieces we send. It just all depends on your budget. Everything works as long as you’re consistent. What I would recommend is six. At least come up with a budget, if you have one, if not there’s free ways to do this. If you have under 500 dollars, I could show you how you could get a deal with under 500 dollars. But, let’s say you have some money coming in, you get a job, or you have some money saved up and you actually wanna take this serious, set a budget for six months; a marketing budget. If you can afford a 1000 dollars a month for six months, do that. If you can afford three, if you can afford 500, it doesn’t matter, set whatever it is and do it for six months. Do that for yourself.

And you wanna know something about Driving for Dollars? We don’t do it often. I think companies don’t really do it often, ’cause you can’t really scale it and you can’t control what’s happening. So this is a huge opportunity for people who are starting out and it’s free.

I heard of someone who did a deal in Miami Shores; Driving for Dollars was one of his first deals and he made 220,000 dollars in an assignment fee. Driving for Dollars. Literally he was driving by, he saw this house, the owner was outside, he just stopped and said, “Hey.” He had learned a little bit of wholesale and he said, “Hey. I’m an investor. I just drove by. Your house looks like it’s in rough shape. Are you looking to sell it?” “Yeah,” da-da-da, talk, talk, talk, he was able to get the contract, and he ended up selling me 220,000 bucks.

Now, results are not guaranteed, but it just goes to show you that you don’t have to know much to get the deal done right.

Speaker 4: Was that a multi-family?

Raul Bolufe: No a single family home. Granted it was a 500 thousand dollar property. So imagine there’s big spread, but I’ve never made 200 grand on one deal so … I’ve been doing it for a while.

So it just goes to show you that … Driving for Dollars. That’s as simple as … The way I’d do it, is I’d probably print out a stack of papers or maybe I’d go to Office Depot or wherever prints these things, and I’d print a bunch with my name, like “We buy houses. Raul, phone number.” And then maybe the back empty, then I’ll write there like, “Hi. I’m Raul. I just drove by. I buy houses cash. If you’re looking to sell, call me. Phone number.” And I’d leave it in their mailbox or in their front door. I just leave a stack in my car, and then I’d go and I’d get off and do it. Or there’s an app. Do you know what the app is called James? The-

Raul Bolufe: Deal Machine? Is that what it’s called. That you could see the houses? There’s an app called Deal Machine and you can download it on your iPhone or whatever phone you have. You put the address, it’ll give you the owner’s information, and I think you can do this in a postcard today, right?

Speaker 6: Take a picture of the property.

Raul Bolufe: You take pictures and you can even send a piece of mail right through the app. You don’t even have to get off your car, you just put it and off you go. So, try to give me an excuse after that. Shit. Anyways, so we got that, we got Bandit Signs …

Speaker 6: How do you go about texting?

Raul Bolufe: So … Last is, in our CRN, we use FreedomSoft and basically they have a functionality that if we have their phone numbers, they could send texts back to there. Is that kinda what you mean?

Speaker 6: Yeah, yeah. How did you guys-