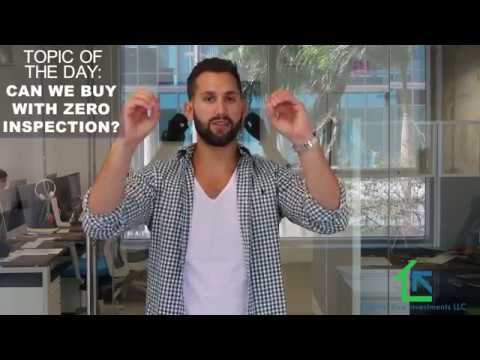 Capital Rise Investments. RB Financial Holdings. I don’t know which one you’ve seen, but a question that I get often … If you’re an agent out there, “Can we buy zero inspection?”

The big zero. Okay? We get that often, and I understand completely why you guys want to know this, because you just don’t want to waste any time with people bullshitting you. I get it, because we’re on that side, as well, sometimes.

The answer is yes.

Yes, zero inspection. However, we would like to see the house. Unless the house is a really good deal, we’ll put escrow and we’ll go forward without seeing it. Usually all we’ve got to do is get in there one time. Okay?

Yes, we do still have to work with investors. But, look up all the records; we have closed a bunch of deals. I’ve put lot of focus on getting a lot of lenders, and a lot of money to back us up to actually be able to close on some of the properties, because I know you guys don’t want to waste time with me if I’m gonna be flipping it, and I’m gonna be wasting your time. I don’t want to do that to you, either.

No one wins, man. No one wins. You think I make money putting you on the contract, trying to sell it, and then lose it? I don’t get any money, we lose time that way. I figured that out, and I said, “Alright, let me get some more money, ’cause money’s key and cash is king, and let’s close on these deals.”

So, yes, the answer is we can do zero inspection. But, usually, we need to get in at least one day and that’s it.

Thank you, guys. Subscribe. Like it. Reach out to us. I’ll put a Calendly link below, so we can speak on the phone if you got any deals. Or, if you just want to talk to me, cool. And, thank you, guys. Let’s buy some deals. Yes. Yes. Yes.