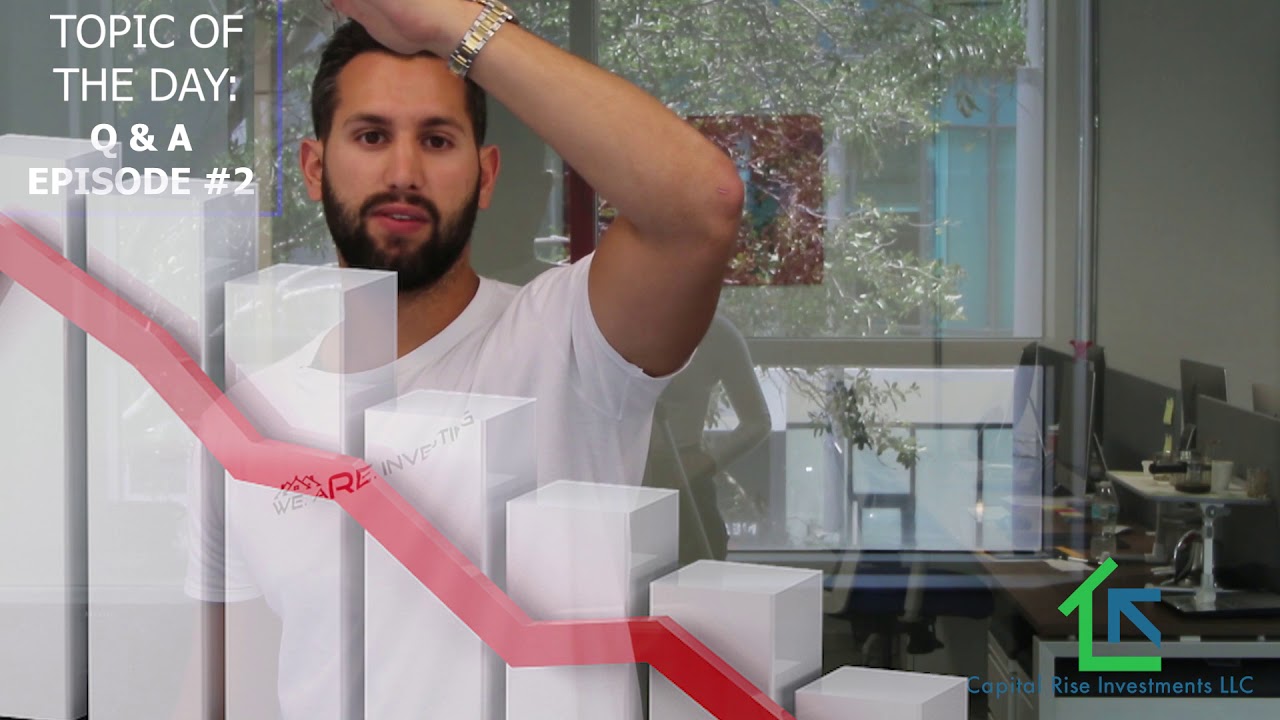 Raul: Hey guys, Raul here from Capital Rise Investments, your number one neighborhood wholesaler. Okay. I shouldn’t have said that.

But, so today, we’re gonna have Q and A episode number two. And Amelia behind the camera is gonna ask me some questions about our local market, fixing and flipping, all these counties, the market, et cetera. So I think it’ll be pretty fun. Hit me.

Raul: So Dade, Broward and Palm Beach are hot and the short answer is that they’re really hot right now. We’ve got a ton of form buyers coming in. If you guys are local, you know exactly what I’m talking about. There’s a ton of form buyers coming in. A ton of Latin money coming in buying all these properties and forcing these prices really, really high. There’s a lot of supply and a lot of demand.

But so much demand, meaning there’s a lot of people, a lot of investors with cash, not only locally, but coming from everywhere bringing up, you know, not enough suppliers, bringing up the prices because the demand is so high. So I would say the local market is really hot, really good to be in the game, as long as you know what you’re doing.

If you don’t know what you’re doing, meaning if it’s your first property you’re fixing or flipping, I would take some more precautionary measures and learn before you get into it. Okay?

Amelia: Second question: what is your take on doing rehabs in Palm Beach?

Raul: So Palm Beach is a new market that we started getting into because Dade and Broward are very saturated. We’re still doing a ton of deals there. However, Palm Beach I like, because Palm Beach is very interesting. It’s got a ton of inventory and it’s really nice areas. There’s a lot of snow birds, meaning a lot of people that come from Canada or you know, far up north to live in Palm Beach. Usually the older folks, older folks. So they go live there and they have a ton of money so they buy all these houses.

You see? So it’s really, here in Dad and Broward, it’s not like that. Here there’s like a set price. In Miami Gardens, in North Miami, in Opalaca, in Lauderhill, in Lauderdale Lakes, if you do this rehab, you’re gonna get this price. If you do a little bit less, you still might get this price because it’s so hot, you know? That’s the philosophy behind it.

So Palm Beach is a very interesting market. Basically what you put in, you get out. So whether you’re experienced or not, I think it’s a pretty awesome market because you’re gonna get your money back regardless, ’cause there’s a lot of demand there, so much demand. And good supply in good areas, like in Boca. Or Palm Beach Gardens or the good areas of Boynton Beach, Delray Beach, too is pretty good. All those areas are so hot. There’s like so many people wanting to live there. Even 55 and over communities are extremely hot.

So I really like Palm Beach. Hot. Palm Beach is hot.

Amelia: Okay. Do you think the market is going to crash?

Raul: All right. So, that was a good question, Amelia. I jumped into our new bean bag here just to test it to see if it was good. I hurt my back a little. Anyway, so the market is not going to crash, it’s going to correct. Okay? So, I mean could it be considered a crash? Yes. But it’s not gonna crash like the recession. I think everybody who’s studying real estate and studying markets knows that.

So it’s a weird place in the market right now because prices are high, right? We’re about 10 percent away from 2006 prices. So prices are high but interest rates are so low. It still makes sense, the money’s so cheap.

So as soon as it starts correcting through you know, 100 other things, okay. There’s wages, there’s prices, there’s market fluctuations, there’s monetary system. A bunch of shit can happen to crash or correct the market. But it’s gonna happen. It’s inevitable. It’s gonna happen.

So I think that’s what’s gonna happen. We’re gonna have a correction and then we might go you for a little while. Now full disclaimer, I’m not, you know, a financial advisor, economist or none of that. This is solely my opinion on research I’ve done myself, people I’ve talked to, other things, you know, my own little knowledge, jumping into bean bags, coming back out stronger than ever. So there’s my answer for that.

Raul: Ooh I like that. I love rentals man. I love rentals. So I have a small portfolio of rentals. I like rentals. I like rentals. It gives you the money. It gives you the money to do a bunch of cool shit. So rental rates are gonna keep rising for a while. When the market corrects, they’re gonna go down. But history shows, even in the worst economies, they only go down 20%, maximum 30%. So that house that rents for 1,000 will now be 700 in the worst ever case scenario, okay? I would say on average 20%. So that house that rents for 1000, 800 bucks.

If the market corrects I don’t think it will affect rental rates, ’cause what happens, right. Let’s think about this. Market corrects, people stop buying houses. Do people need to live in houses or apartments or condos, whatever? Yeah. But they just don’t buy them. So what do they do? You rent them or you go live with your mom, okay, in the attic or the basement and like play Halo, level three. I don’t know, do they have levels of Halo? I don’t know.

Anyways, so that’s what’s gonna happen. The market’s gonna correct, people are gonna be like, alright, let me hold off on buying until the next cycle or until something else feels right in my little heart. And I’m gonna go rent a house.

I actually think apartment rentals are gonna go up when there’s a correction. I think that the nice apartment buildings will go up because think about it. If you lived in a house, you sold it because the market’s hot. You don’t wanna buy, but you need to rent. The rental for that same house that you sold is very expensive, way more than your mortgage. You can’t even afford it. So you’re gonna be like, shit I wanna go live in a nice apartment. You know? I feel like a lot of people are gonna do that.

So to answer the question, I think rental rates are gonna sustain for a while, they might go up slightly, you know fluctuate or whatever. But overall, they will go up. And if they do go down, 20% is my number that they’ll go down. I don’t think it’ll go much further than that.

Amelia: Good. Okay. Last question: are fix and flips going to get tighter?

Raul: Are fix and flips gonna get tighter? So man, I talk to investors all the time. I started about four years ago, right. So four years ago, fix and flips were really good. They’re still really good. So here’s a philosophy, I mean, here’s a short answer. The short answer is no, they won’t get tighter. They’re not gonna get tighter than this. Much tighter than this is you make no money, you know. It is a little crazy what some people are buying nowadays. But I understand why.

Now people are expecting 10, 15% and they’re okay with that. I can’t see it getting much tighter than that. Honestly I can’t see it. And we’re just, we’re so close to ’06 prices, which is the peak, peak, peak, that we’re not gonna surpass that. And if we do, it’s possible, right. I don’t know it all and I don’t know much, well whatever. It’s possible but its not gonna go by much, okay.

And the good thing about fix and flips when they’re tight, is that when you do find that good deal, it sells right away. And you sell it super quick, there’s a ton of people waiting for the hot inventory. So was that the last question Amelia?

Raul: So thank you guys. I hope you enjoyed this Q and A, episode number deuces, I don’t know why I did that. But whatever. Two. So yeah, we’re gonna probably do these once a month, once a week, once a year. I don’t know. Whenever. Subscribe below if you wanna hear more. If you wanna have a call with me or something, hit me up. You could schedule it there, go to our website, call us about some deals. Hit me with anything. Let’s get it guys. I’m gonna jump away now.